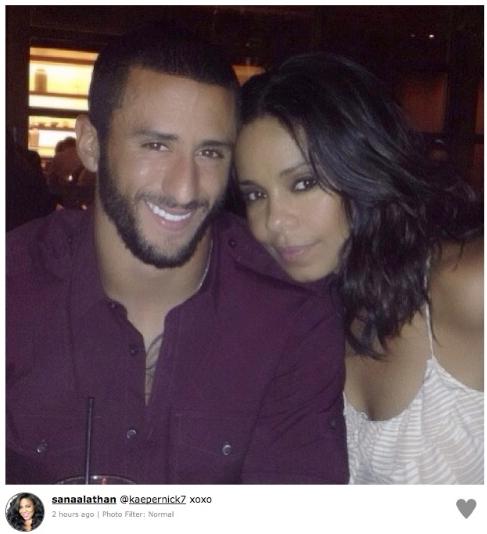 If it is on Instagram … it must be true!

The “Love & Basketball” actress was cuddling San Francisco 49ers QB Colin Kaepernick, 25. She captioned the pic “@kaepernick7 xoxo.” The star athlete reposted the photo on his Instagram saying, “@sanaalathan this.”

The image looks like they’re in a restaurant on a date. The status of the cozy couple has yet to be confirmed. And in case you’re trying to do the math, Lathan is 17 years older than her NFL boo. Hmm, we can’t help but wonder if this is what caught her eye:

Lathan, by the way, can be seen this November in “The Best Man Holiday.” According to sources, she is viewed as one of the most sought after bachelorettes in Hollywood. Lathan has appeared in numerous movies, including the box-office hits “The Best Man,” “Brown Sugar,” “Alien vs. Predator” and “The Family That Preys.” And she was nominated for a Tony Award for her Broadway performance in “A Raisin in the Sun.”

Sports fans might better recognize the No.7 player if he was flexing and kissing his bicep and clenching his fist resting on his head – Kaepernicking, his signature pose.