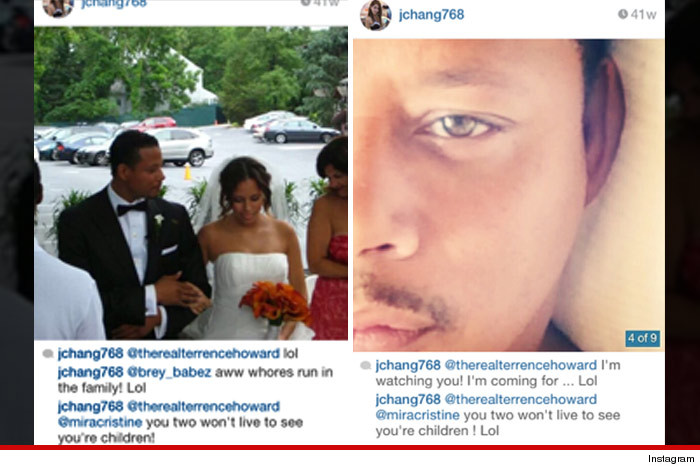 “Empire” star Terrence Howard doesn’t just have a TV ex-wife threatening him, he has a real life one he says is targeting him for death … and the LAPD is on the case.

TMZ has obtained a search warrant to determine if Michelle Ghent is behind a barrage of Instagram threats, including, “I’m watching you! I’m coming for … LOL. You two won’t live to see your children.” The “you two” appears to refer to Terrence and his new wife.

Another Instagram post warns his wife, “Your husband is cheating on you! Just thought you should know.” The message was sent with a photo of Terrence and another woman.

And there’s this … there’s a pic of a pill bottle that belonged to Terrence with the caption, “Oh dear, look what I found. Do hope you refilled. It’s one of the things you can’t leave home without.”

The LAPD claims in the search warrant affidavit, there’s reason to believe Michelle is behind the postings. One reason … the Instagram accounts have no followers except for her.

The LAPD got a judge to sign the warrant and they have gone on the hunt to find out if she’s behind it.

Terrence says he’s been getting nasty posts for a year … and he filed a police report because he believes she’s the culprit.

Michelle tells TMZ, she did not send the messages and claims the LAPD has talked to her and she’s no longer a suspect.